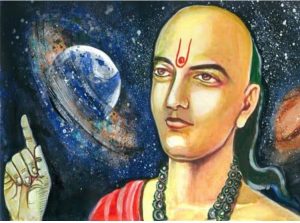 The value of π has been given in the verse 10 of the Ganita Papda which translated into English reads like this:

This means π=62832/20000=3.1416 which is indeed the accurate value. Aryabhata’s value of π is a very close approximation to the modern value and the most accurate among those of the ancients. Thus, there are reasons to believe that Aryabhata devised a particular method for finding this value. Aryabhata himself used this method and several later Indian mathematicians and even the Arabs adopted it. The conjecture that Aryabhata’s value of π is of Greek origin has been critically examined and has been found to be without any foundation. Aryabhata discovered this value independently and also realised that π is an irrational number. Thus, the credit of discovering this exact value of π goes to the celebrated Indian mathematician, Aryabhata.

Area of the Circle:

How to arrive at the area of a circle has been given in the verse 7 of the Ganita Pada which translated into English reads like this:

This is precisely correct. The circumference as well as diameter in this method could be measured by a rope to arrive at the correct area of a circle.

Verse 12 of Gitika Pada provides the precise details of the sine function. The precise translation of this verse is as follows:

Aryabhata named sine function as ज्या or JYA which was called as JIBA in Persian when it travelled to Persia. When this function travelled to Europe from Persia, JIBA was then translated into Latin as SINUM and became SINE in English.

In verse 6 of Ganita Pada Aryabhata explains the area of a triangle. When translated in English the verse reads as follows:

For a triangle, the result of a perpendicular with the half-side is the area.

According to J. J. O’Connors and E.F.Robertson of the School of Mathematics and Statistics, University of St. Andrews Scotland; Aryabhttiya is “the first work we are aware of, which examines integer solutions to equations of the form by = ax+c and by = ax-c where a,b,c are integers. The problem arose from studying the problem in astronomy of determining the periods of the planets. Aryabhata uses the kuttaka method to solve problems of this type. The word kuttaka means “to pulverise” and the method consisted of breaking the problem down into new problems where the coefficients became smaller and smaller with each step. The method here is essentially the use of the Euclidean algorithm to find the highest common factor of a and b but is also related to continued fractions”.

“We now look at the trigonometry contained in Aryabhata’s treatise. He gave a table of sines calculating the approximate values at intervals of 90°/24 = 3° 45′. In order to do this, he used a formula for sin (n+1) x – sin nx in terms of sin nx and sin (n-1) x. He also introduced the versine (versin = 1 – cosine) into trigonometry”.

In Gola Pada of Aryabhattiya, Aryabhata correctly stated that the Earth rotates about its axis daily, and that the apparent movement of the stars is a relative motion caused by the rotation of the Earth, contrary to the then-prevailing view, that the sky rotated. To explain this, he said “Just as a man in a boat moving forward sees the stationary objects (on the shore) as moving backward, just so are the stationary stars seen by the people on Earth as moving exactly towards the west”. Aryabhata gives a systematic treatment of the position of the planets in space. The positions and periods of the planets were calculated relative to uniformly moving points in a heliocentric model. He correctly, asserted that the planets shine, due to the reflection of sunlight, and that the eclipses occur due to the shadows of moon and earth and not due to Rahu and Ketu as per the then prevailing belief. In verse 4 of Gola Pada Aryabhata states that “Moon is like water; Sun is like fire. Moon obstructs Sun and the shadow of the Earth obstructs Moon causing eclipses.” Subsequently he discusses at length the size and extent of the Earth’s shadow (verses Gola Pada 38–48) and then provides the computation and the size of the eclipsed part during an eclipse He correctly deduced that the orbits of the planets are ellipses.

Based on the above brief description of the contribution of Aryabhata one can imagine the genius he was. He was the father of so many modern concepts of mathematics, physics and astronomy. Many Chinese and West Asians scholars have acknowledged the contribution of Aryabhata. These include; I-Ching from China and Al Ahwazi, Abu Mashar, Al Khwarizmi, Al Hashmi, Al Biruni and Al Sijzi from West Asia. In Persian and Arabic texts Aryabhata has been referred to as Al Arjbahar. If we could find his other two works, the world will be many times richer. Unfortunately, credit for such discoveries has been given to western scholars due to colonization of India and westernization of Indian education. I wish we could include all such knowledge in our books to enable the younger generation to understand our rich heritage. If we Indians cannot pay tribute to him then who will?