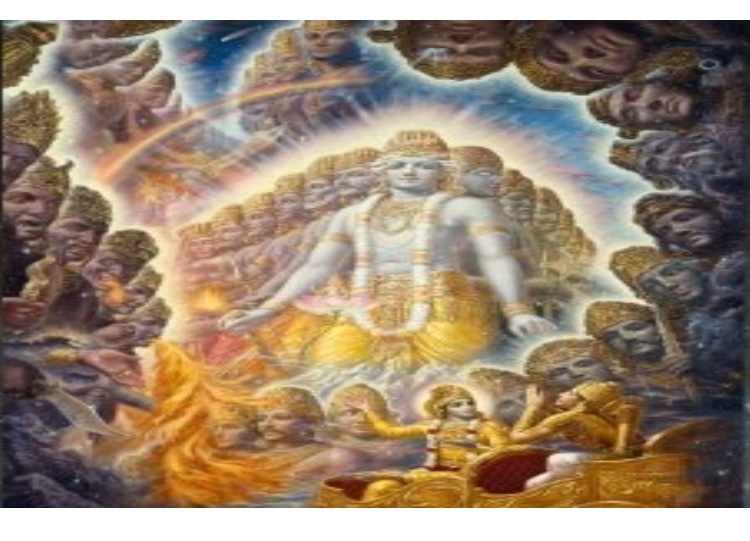 ​In 2012 when I was posted in Budapest as Ambassador of India to Hungary and Bosnia & Herzegovina, a well-known French professor came to Budapest to deliver a talk on the “Chronology of Time”. I went to attend the talk out of curiosity. In his presentation the professor explained the beginning of time 4000 years before the Christian Era and outlined the chronology of events in the Christian history over this period. At the end of his presentation, I simply asked him, “By the very nature of this assumption we are separating time and space from the Universe. This assumption implies that there was time and space even before the origin of the Universe because the Universe originated at X point in time and Y point in space(4000 BC). We are thereby putting the origin of the Universe before its origin which is illogical and irrational”. He was stunned and could not give any clear answer.

​Indian writings provide highly scientific and precise explanation of time. Hindu units of time are defined in several Hindu texts (Bhagavat Puran,Vishnu Puran, Mahabharata, Surya Siddhant) ranging from microseconds to trillions of years. According to these writings time (काल) is eternal with no beginning and no end. Like Brahman, it is formless and without any attributes still all pervasive, permeating the entire existence. It is static yet moves subjecting every single material existence to its vagaries. Hence every single material existence, whether conscious or non-conscious, ages with time without exception. In course of time, they decay and then die. Life of every material existence is defined in terms of time. That is why in Sanskrit time and death both are called Kaal काल. Depending on the nature of the individual material existence, life-cycle could range anywhere between a few seconds to trillions of years. Human beings are born and then they pass through the cycle of childhood, adulthood, old age and eventual death. There is no physical entity, conscious or non-conscious, that could defy this cycle of life. This is an eternal law of nature. A plant sprouts from a seed, then it grows into a tree and finally years later it dies and dissolves in nature. Mountains and rivers are created and thousands of years later as a result of some tectonic event they are destroyed. Similarly, since the Universe is a material manifestation, it must follow this law. It must have a life-cycle of its own. According to the Vedic writings, the creation and dissolution of the Universe are governed by natural cycles that repeat in perpetuity.

​In the western world time is considered linear. Precisely for this reason they believe that the universe was created on a particular day and they do not talk about its life and eventual destruction (प्रलय). On the other hand, Indian sages from the very beginning defined time in a cyclical form (कालचक्र) which keeps repeating in the form of Brahma’s day and night (कल्प). We measure time for our convenience based on the movement of cosmic bodies like sun and moon (day and night, seasons and years). Month is measured based on the phases of the moon and then adjusted in accordance to the sun-cycle. Shrimad Bhagvatamprovides very precise description for counting of time which starts with atomic time (1687.5 parts of a second) and continues until 311 trillion and 40 billion years – the life of Brahma.

The (material manifestation’s) ultimate particle which is indivisible and not formed into a body is called the atom. It exists always as an invisible identity (even after the dissolution of all forms). The material manifestation is nothing but a combination of such atoms, but it is misunderstood by the common man.(3/11/1)

Atoms are the ultimate state of the manifest universe. When they stay in their own forms without forming different bodies, they are called the unlimited oneness.(3/11/2)

Thus, one can estimate time by measuring the movement of the atomic combination or bodies. Time is the potency of the Brahman who controls all physical movement although He is not visible in the physical world. (3/11/3)

Atomic time is measured according to it covering a particular atomic space. That time which covers the non-manifest aggregate of atoms is called the great time (infinite). (3/11/4)

The time duration needed for the integration of three trasarenus (the time taken to form three hex-atoms) is called a truti, (a second divided into 1687.5 parts) and one hundred trutis make one vedha. Three vedhasmake one lava. (3/11/6)

The duration of time of three lavas equals one nimesha, the combination of three nimeshas makes one kshana, five kshanas combined together make one kashtha, and fifteen kashthas make one laghu (equal to two minutes). (3/11/7)

Fifteen laghus make one nadika, which is also called a danda. Two dandas make one muhurta, and six or seven dandas make one fourth of a day or night, according to human calculation. (3/11/8)

The measuring pot for one nadika, or danda, can be prepared with a six-pala-weight [fourteen ounces] pot of copper, in which a hole is bored with a gold probe weighing four mashas and measuring four fingers long. When the pot is placed on top of water, the time before water overflows in the pot is called one danda. (3/11/9)

It is calculated that in the day and in the night of human beings there are four praharas each, which are also called yamas. Similarly, fifteen days and nights are a fortnight, and there are two fortnights, (shukla and krishna paksha) in a month. (3/11/10)

Two solar movements make one day and one night of the demigods and that combination of day and night is one complete calendar year for the human being. Human life has a duration of one hundred years.(3/11/12)

Influential stars, planets, luminaries and atoms all over the Universe are rotating in their respective orbits under the direction of the Supreme, represented by eternal time (kaal). (3/11/13)

There are five different names for the orbits of the sun, moon, and stars and they each have their own orbits (samvatsara). (3/11/14)

​Based on the above writings, the following precise measurements have been arrived at in the Bhaktivedanta writings in terms of the modern clock.

The above verses of the Srimad Bhagavatam provide a glimpse as to how scientific these writings are. They encompass most advanced principles of physics, chemistry, astronomy, mathematics and geometry. Even with tremendous advances in modern science it is not easy to understand these ancient writings with their full import.