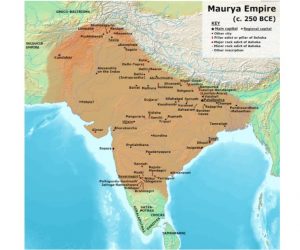 ​There is consensus amongst western economists that historically India was the largest economy of the world for over 2700 years starting first millennium BCE until 1720 AD. Angus Maddison, an American economist undertook a detailed study of Gross World Product (Global GDP) starting from 1AD. The following graph from the Contours of the World Economy by Angus Maddison, clearly depicts that India dominated the world economy until 1720 AD. During this entire period Indian economy was the largest in the world (except for a short period when it was the second largest) with a share in global GDP ranging somewhere between 25 to 34 %.

To understand the economic heritage of India, a brief overview the economic history of ancient India would be desirable. The Vedic period saw countable unit of precious metal being used as medium of exchange. The term Nishka appears in this sense in the Rig Veda. The Ramayana and the Mahabharata (over 8000 to 5000 years ago) are replete with references to gold coins, silver coins, diamonds, other precious and semi-precious stones, pearls, metallurgy, agricultural produce, agricultural tax system and animal wealth. While Ayodhya was an important political, economic and cultural centre during the period of Ramayana; Hastinapur was the principal centre of economic and political activities during the Mahabharata period. Construction of a magnificent city called Indraprastha (present day Delhi) by the Pandavas speaks of highly developed architecture. The Epics of Ramayana and Mahabharata also talk of a variety of weapon systems implying well-grounded knowledge of metallurgy and warfare technology.

​According to the western historians, Indus Valley Civilization is the first known permanent and predominantly urban settlement, that flourished between 3500 BCE and 1800 BCE. It featured an advanced and thriving economic system. Evidence of well-laid streets, layouts, drainage system and water supply in the valley’s major cities, Dholavira, Harappa, Lothal, Mohenjo-Daro, and Rakhigarhi, reveal their knowledge of urban planning. Agriculture was the predominant occupation fulfilling basic food requirement while providing raw materials for hand-based industries such as textile, silk, food processing, spices and crafts. There were well defined occupations of weavers, ironsmiths, goldsmiths, carpenters, craftsmen, barber and so on. Over time, most of these professions became family traditions with children learning from their parents. They were able to make sharp tools and weapons from iron, bronze, copper and tin. Pilgrimage towns like Prayagraj, Kashi, Benares, Gaya, Nasik and Puri mostly centred around rivers, developed into major hubs of trade and commerce.

​Vedic scriptures prescribe four principal life objectives – Dharma (धर्म), Artha (अर्थ), Kama (काम), and Moksha (मोक्ष) meaning; righteous conduct, earning of wealth, fulfilment of worldly desires, and salvation. Indian sages knew it well that unless the minimum body needs are fulfilled, higher spiritual aspirations cannot be realised. Thus, the Vedic scriptures clearly sanction earning of the wealth through lawful means as one of the objectives of life. In fact, earning of wealth was considered essential not only for a meaningful living but also for performance of household and religious functions and duties. Thus, sanctioned by the Vedic scriptures, economic activities thrived all over the country from the very beginning of the Vedic period. Agriculture, textiles, silk, gems and jewelry,spices, animal husbandry, handicraft, metallurgy, fishing and ship industry were the mainstay of the economy in those days. While India’s many kingdoms and rulers minted and issued coins, earliest archaeological evidence has been found of the punch-marked silver coinage minted and circulated by Mahajanpadas round 600 BCE. For almost three millennia India dominated the global trade. Textiles, silk, spices and handicraft constituted major exports to different parts of the world. Land as well as sea routes were used for international trade

​Maurya Empire (322-185 BCE) with its capital in modern Patna in Bihar, is well-known for its economic prosperity. The population of the empire has been estimated to be about 50–60 million, making the Mauryan Empire one of the most populous and most prosperous empires of antiquity. Internal and external trade, agriculture, and economic activities thrived and expanded across South and Central Asia due to the creation of trade routes, an efficient system of finance, transportation, administration, and security. The Grand Trunk Road, world’s oldest and longest road in those days and vast trade networks were constructed during this period. Under Ashoka, economic and cultural activities expanded to Sri Lanka, South East Asia and Central Asia in addition to the existing trade with Persia, Arab regions and Europe. Chanakya, an advisor to Chandragupta Maurya, provides detailed description of economic, political and administrative activities of that time. Chankya’s Arthshastra – the oldest treatise on economics, politics and diplomacy – talks of agriculture, animal protection, grazing grounds for animals, handicraft, fair tax system, arbitration, savings and investments, duties of the ruler and economic justice.

The iron pillar of Delhi which is 23 feet 8 inches high with 16 inches of diameter, constructed by Chandragupta II (reigned c. 375-415 CE), presently stands in open in the Qutub complex at Mehrauli in Delhi. During this long period of over 1700 years, the pillar has not even rusted. Comparable rust proof iron pillars have also been found in Dhar in Madhya Pradesh and Kodachari in Karnataka. These are the living proofs of India’s advances in metallurgy.

Even greater prosperity was seen during the Gupta Empire (320 -550 CE) which is known as golden period of Indian history. The court of Chandragupta Vikramaditya was the most illustrious by the fact that it was graced by the Navaratna (Nine Jewels), a group of nine illustrious individuals who excelled in human conduct, philosophy, literature and arts. They worked as the advisors to the King. Amongst these men was Kalidasa, whose works are the tallest of all literary writings dwarfing the works of many literary geniusesaround the world. Art and craft flourished during this period popularly known as ‘Gupta Art’. Industrial production flourished as well. India exported Muslin of Dacca, Calicos of Bengal, Shawls of Kashmir, Sarees of Benares, silk and silk made-ups, gems and jewellery, cardamom, pepper, cinnamon, indigo, marble works, stone carvings, iron and steel tools, metal wares, wood carvings and so on. India was famous for the artistic work of its craftsmen. New secure trade routes were constructed to promote international trade and commerce.

​Fa-hsien, a Chinese traveller who spent six yearsin India during the reign of Chandragupta Vikramaditya found the country remarkably peaceful, devoid of any serious crime, economically prosperous and socially harmonious. Here is one of his observations in his own words.

​“The snow and heat are finely tempered, and there is neither hoarfrost nor snow. The people are numerous and happy. They have not to register their households. Only those who cultivate the royal land have to pay (a portion of) the gain from it. If they want to go, they go. If they want to stay on, they stay on. The king governs without decapitation or (other) corporal punishments. Criminals are simply fined according to circumstances. Even in cases of repeated attempts at wicked rebellion, they only have their right-hand cut off. The king’s bodyguards & attendants all have salaries. Throughout the whole country, the people do not kill any living creature, not drink any intoxicating liquor, nor eat onions or garlic.”

​Similar prosperity was seen during empires of the Shakas (Indo Scythian), Kushans, Cholas, Harsh Vardhan, Palas, Rashtrakutas, Vijaynagar and so on. Despite multiple Muslim invasions and lootings between 11th and 15th centuries, even during the Moghul rule India’s economic prosperity and international trade continued to prosper. The cities of Delhi, Agra, Fatehpur Sikri, Lahore, Ahmedabad, Gauda, and Vijaynagar were described as extraordinarily rich by the Persian visitor Abdul Razzak during the Moghul period. Along with individual and family–owned businesses; there were a variety of collective economic activities. Nigama, Paniand Shreni are supposedly references to the economic organisations of merchants and craftsmen. Earliest evidence of banking activities anywhere in the world is found in the form of Hundis going back to Maurya period. Similar evidence is available of business arbitration systems prevailing at that time. Decline of Indian economy set in with British colonization and the advent of Industrial Revolution in Britain around 1760. These two combined, led to the collapse of India’s economic dominance and gradual impoverishment of India. Utsa Patnaik, a renowned economist, in an essay published in Colombia University Press in 2018 has claimed that a total of $45 trillion worth of wealth was transferred from India to United Kingdom between 1765 and 1938 leaving India impoverished.