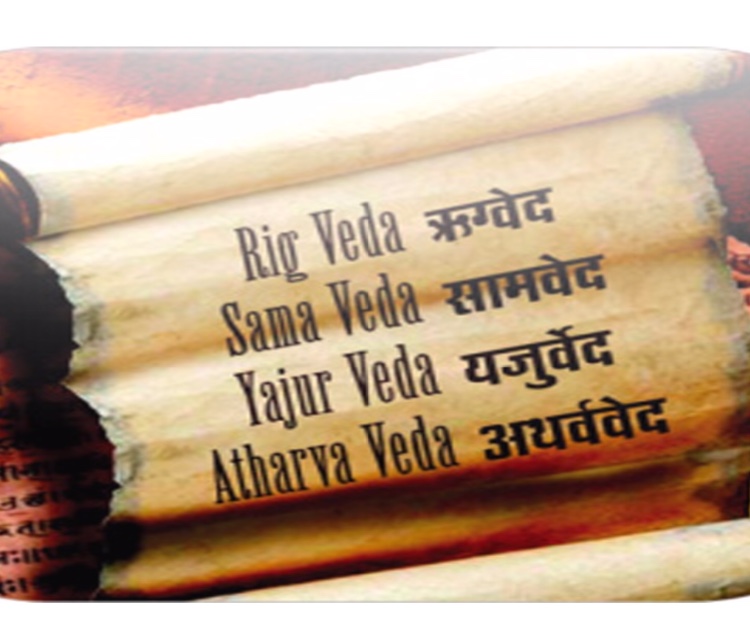 Let noble thoughts come to us from every side.(Rigveda 1-89-1)

​The Sanskrit name वेद originates from विद् meaning knowledge. Thus, literally Veda means knowledge. It does not refer to one single literary work, but indicates a huge corpus of literature, which arose in the course of many centuries and has been handed down from one generation to another generation by oral transmission. ‘Veda’ is also called ‘Shruti’ meaning what is heard, as opposed to the ‘Smriti’ composed by sages. Rigveda is universally regarded as the oldest compilation of human wisdom anywhere. The antiquity of the Vedas remains a matter of conjecture anywhere between 3 billion years to 5000 years. It has been said in many scriptures including Bhagvad Gita, Verse 4.1, that the Vedas were revealed at the beginning of new the Kalpa which is equal to 4.32 billion years. When the modern scholars talk of the age of the Vedas, they basically refer to the period of their written text and not the time when the text was originally revealed. However, I do not wish to debate on the antiquity of the Vedas purely on conjectures.

​In terms of their universal values, contribution and wisdom; Vedas are considered as the most precious heritage of humanity. Commenting on the greatness of the Vedas, a well-known American philosopher and poet David Henry Thoreau said “Whenever I have read any part of the Vedas, I have felt that some unearthly and unknown light illuminated me. In the great teaching of the Vedas, there is no touch of sectarianism. It is of all ages, climes and nationalities and is the royal road for the attainment of the Great Knowledge. When I am at it, I feel that I am under the spangled heavens of a summer night.” Francois Voltaire a French philosopher, historian and writer shared similar views when he said, “The Veda was the most precious gift for which the West had ever been indebted to the East”. Max Mueller a German born philologist and orientalist holds similar views when he says, “Whatever may be the date of the Vedic hymns, whether 1500 B.C.E. or 15,000 B.C.E., they have their own unique place and stand by themselves in the literature of the world”.

Bela Hamvas, a Hungarian thinker, philosopher and writer went even a step further when he said, “Veda is the ultimate knowledge. During the time of the collapse of the world if only one book could be saved that must be the Vedas”. “Vedas and Vedic knowledge are gifts of India to world”says Dr. Tony Nader a neuroscientist, PhD from MIT and a Research Fellow at Harvard Medical School. In his book “Human Physiology: Expression of Veda and the Vedic literature” Nader endorsed the Vedic viewthat the physical and material are aspects of consciousness rather than consciousness being an epiphenomenon of physical matter or a product of the brain and the nervous system.

​Rigveda is the largest of all the four Vedas. Hindu tradition suggests that the Vedic hymns were “revealed,” to the sages, who were known as the seers or मंत्रदृष्टा of the hymns. For this reason, Vedas are also called Apaurusheya meaning not made by humans but revealed by the Divine. Each Veda consists of four parts-the Samhitas (hymns), the Brahmanas (ritualistic explanations), the Aranyakas (theologies) and the Upanishads (philosophies). The collection of mantras or hymns is called the Samhita. The whole of the Rigveda-Samhita is in form of verses, known as Rik or Richa. ‘Rik’ is the name given to those Mantras which are meant for the praise of the deities. In terms of their composition the Vedas have three kinds of mantras Rikor verses, Yajus or prose and Saman or chants.

​The Rigveda Samhita contains about 10552 Mantras/Richas, classified into ten books called Mandalas. Each Mandala is divided into several sections called Anuvakas. Each Anuvaka consists of a number of hymns called Suktas and each Sukta is made up of a number of verses called Riks. A group of Riksdevoted to one Devata (demi-god) or assigned to one seer is called a Shukta. The Samhita of the Rigveda comprises 10 Mandalas, 85 Anuvakas, 1028 Suktasand 10552 Mantras or Riks or Richas. According to Satpath Brahman book the number of syllables in Rigveda is 432000 which is the basic unit for calculation of Yugas. Usually Anuvaka is not mentioned for the reference of a Mantra of the Rigveda. For example, RV 2.10.7 simply means the seventh Mantra of the tenth Sukta of the second Mandala of the Rigveda.

​Richas in Rigveda have been revealed by 414 Rishis including 29 female Rishis. The Vedic Richaswere seen and only spoken by the seers (Rishis) and hence they are not considered their authors. Theprimary seers identified are: Atri, Vashistha, Vishwamitra, Jamadagni, Gotama Kashyapa,Bharadwaja, Bhrigu, Angira, Grtsamada, Kanwa,Agastya and Bharata. The first seven of them are also known as सप्तऋषि or seven sages. Vedas are in poetic language with metaphors and utmost brevity like algebraic formulae. All the features of Classical Sanskrit poetry can be traced to the Rigveda. Among 1028 Suktas of the Rigveda Samhita some suktas are very popular and frequently referred by the readers of Vedas. Some of them are:

Besides, there are many Suktas offered to different deities, such as, Indra, Maruta, Varuna, Usha, Surya, Bhumi, Soma, Agni etc. Also invoked in the Rigveda are Savitr, Vishnu, Pushan, Brihaspati, Brahmanaspatiand Rudra. Structure-wise, the hymns are arranged in decreasing order for each collection of deities. For each deity, the hymns gradually progress from longer to shorter. Rigveda also contain the famous Gayatri and Mahamrituynjaya mantras. Given the mysterious nature of Vedic Mantras, it is not easy to understand their real import by simple words and their translations. The Rigveda itself categorically states this fact in Mantra RV10.71.4 as quoted below.

“Some perceive the speech but perceive it not, some listen to it but listen it not. For others it reveals its secrets just as finely clothed faithful wife displays her body to her husband”.

In subsequent parts of this article we shall have a look at some selected Mantras containing profound wisdom of our existence.