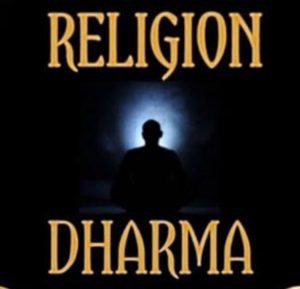 In English, dharma is often translated as ‘religion’ which is certainly not the correct meaning of this Sanskrit word. In fact, the Sanskrit word dharma has no real counterpart in the European languages or terminology. The word religion comes from the Latin root ‘religio’ which means ‘to bind together’. In practice, religion is normally interpreted as an organized mode of life which brings a group of people together based on certain beliefs, rituals, revelations or a collection of such revelations in the form of a book. Religions imply a central code of commandments and have rigid principles defining good and bad and prescribe rituals and conduct leaving hardly any choice to the individuals. On the other hand, dharma is entirely an individualistic concept to be decided upon by the individuals in a given context. Dharma provides complete freedom to each individual to decide on the moral and ethical questions and just and righteous behavior in a given situation, based on their own values and understanding.

Religion on the other hand prescribes identical rules of behavior for all the followers of that religion. Blind faith is the guiding principle governing religions. Most religions don’t even allow these rules to be questioned. They must be accepted as they are since they are supposed to be based on revelations by the messenger of God. On the other hand, the principle of individual freedom is an integral part of dharma, while religions are collective in nature. Dharma is never imposed from outside but it comes from within, from a sense of just and right conduct. Dharma actually transcends all religions, all societies and all variety of human conduct. However, since there is no other word in English language to define this concept, dharma is loosely translated as religion. Nevertheless, we must understand that these are two completely different concepts with different meanings and substance. This will become clearer as we move forward in the process of understanding the concept of dharma. However, despite these differences we must also understand that the primary purpose of all religions is to guide an individual to the path of dharma. Unfortunately, due to the prescribed nature of most religions and the rituals as part thereof, religions often end up becoming a hurdle in the path of dharma. Religious prescriptions could be used for guidance in search of the right path but they must not dictate. We therefore need to rise above these rituals and prescriptions to discover our true self. Our own self and the self alone could enable us to discover the path of dharma.

Raj Dharma or Conduct of a Ruler:

Since the decisions of a ruler have an impact on the entire population of a country, raj-dharma or duties of a ruler have found considerable space in the ancient Indian writings. The Manusmriti, the Mahabharata, and the writings of Kautilya have placed considerable emphasis on the duties and conduct of a ruler. The standards governing the conduct of a ruler have been placed at a much higher level than that of an ordinary citizen. A ruler’s personal happiness has been subordinated to that of his subjects’. Justice, freedom, security, law and order and happiness of the people constitute the core of raj-dharma. The following verses from the Mahabharata summarize the core of raj-dharma beautifully.

That king is the best in whose realm people live without fear, just as the sons live without any fear in the house of their father.

When the king wipes off the tears of the poor, the dispossessed and the old, and creates happiness among the people; such conduct on his part is called raj-dharma.

Harassed and oppressed, when a person is left defenseless and unprotected, there the oppressor is punished severely by some higher power.

The tears that fall from the eyes of those who are accused falsely and are helpless can destroy an entire kingdom.

Kautilya speaks of the following supreme maxim to which the ruler must be subjected to and to which all his actions be subordinated.

It is therefore clear that the conduct of a ruler must be dictated by the greater good and happiness of his subjects and not by his own happiness. Nevertheless, the basic principles governing the concept of dharma or the just and righteous behavior of an individual remain unchanged and are applicable in all situations. The modern concept of national constitution, criminal and civil laws and regulations governing societies and nations have their root in the Indian concept of dharma.