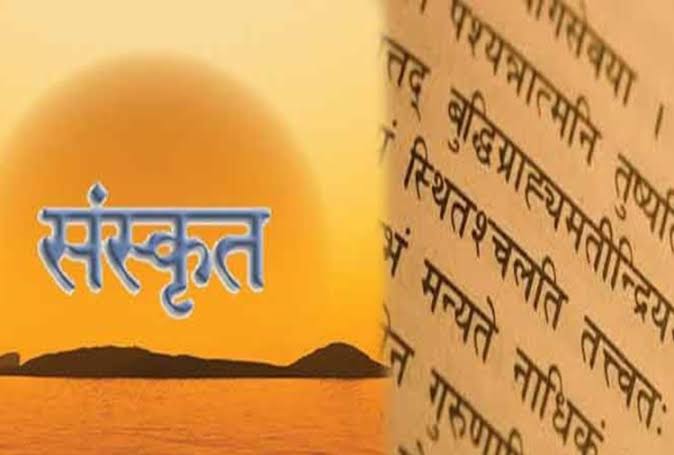 “The Sanskrit language, whatever be its antiquity, is of wonderful structure; more perfect than the Greek, more copious than the Latin, and more exquisitely refined than either”.

Sanskrit is perhaps the oldest and the most prolific language known to mankind. Since the Rigveda- the oldest written scripture in the world is in Sanskrit; origin of Sanskrit as language must precede the Rigveda. Scholars admit of considerable influence of Sanskrit on Tamil, Greek and Latin which are considered other ancient languages of the world. Sanskrit is also called the mother of languages as most of the Asian and European languages find their origin in Sanskrit. ‘Indo-European languages’ is a term coined by the Europeans to acknowledge origin of European languages from Sanskrit. Scholars distinguish between Vedic Sanskrit and its descendant Classical Sanskrit; however, these two varieties are very similar and differ marginally in some points of phonology, grammar, and vocabulary.

Scholars and linguists agree that Sanskrit is the most scientific and systematic language; the world has ever known. The Sanskrit alphabets and phonology are most scientific innovations based on human physiology. It is widely believed that Sanskrit mantras, when recited in combination with the sound vibrations, have a specific effect on the mind and the psyche of the individual.

Sanskrit is also called ‘Dev Vani’ or the language of the gods. It is said that Brahma – the Creator, introduced this language to the sages of celestial bodies. Looking at the science, perfection and near mathematical precision of the language, one can easily surmise that it could have been invented only by super-humans.

Sanskrit is rich in vocabulary, phonology, grammar, and syntax, which remains undiluted to this day despite its antiquity. The sound known as sabda (also Nada and Vāc) in Sanskrit is considered as the primal cause of vibration leading to movement of the kinetic energy in the universe. Given the significance of sabda, the purity and perfection of language had acquired a special meaning in ancient India. Sanskrit reflected all that. Considering the exalted status of the language, the people who spoke Sanskrit were considered wise, well-educated and refined.

Sanskrit script consists of 52 letters in total, 16 vowels and 36 consonants, all directly linked to human physiology. These 52 letters have never been tweaked or altered and have been constant since the beginning, retaining its unbroken tradition for word formation and pronunciation. I know no other language in the world which has 16 basic sounds and 36 consonants. Sanskrit therefore, provides the most elaborate and scientific structure and phonetics compared to any other language in the world. (English has only six basic sounds; a, e, i, o, u). Precisely for this reason, Sanskrit is called mathematical language of the world. Sanskrit text written thousands of years ago could be interpreted and understood without any dilution or alteration in their meaning, which is not the case for most other languages of the world. It is therefore natural that Sanskrit language has an outstanding place in India’s civilization and culture and is considered as the language of rare sublimity with perfect expression.

50 of the 52 Sanskrit alphabets have their origin directly from the chakras in human body. The Vishuddh Chakra (विशुद्धचक्र) with its 16 petals have given birth to 16 vowels as given below.

The Anahat Chakra (अनाहट चक्र) with its twelve petals gave birth to first 12 consonants in Sanskrit alphabet as stated below.

Next, the Manipur Chakra (मनीपुर चक्र) with its 10 petals has given birth to next 10 consonants in Sanskrit alphabet.

Next, the Svadhisthan Chakra (स्वाधिष्ठान चक्र) with its 6 petals has given birth to the next 6 consonants in Sanskrit alphabet.

Next, the Muladhar Chakra (मूलाधार चक्र) with its 4 petals has given birth to next 4 consonants as given below.

In order to provide precision of expression and sound the Sanskrit has elaborate system of phonetics which is once again deeply connected to human physiology. Depending on the use of different mouth organs, both the vowels and the consonants have been divided into five categories namely; gutturals, palatals, labials, cerebrals, and dentals. The group of gutturals is followed by palatal and so on in a systematic way. Gutturals are pronounced with the help of throat, palatals with the help of jaw, cerebrals with the tongue hitting the roof of the mouth, dentals with the help of teeth and the labials are pronounced with the help of lips. In addition, the vowels have also been divided into short and long. This pattern has been explained in the table given below. I know no other language with such a scientific pattern of alphabets.

Grammar of Classical Sanskrit, created by great grammarian Panini (Aṣṭādhyāyī of Pāṇini) is highly sophisticated to ensure that expression is precise, logical and elegant. Sanskrit verbs are conjugated in three persons; first, second and third. Verbs also have three numerical forms; singular, dual and plural. Verbs are expressed in ten tenses and three voices active, middle, passive. There are eight cases: nominative, vocative, accusative, instrumental, dative, ablative, genitive and locative and three genders; masculine, feminine, and neuter. The following is an example of the conjugations of a typical Sanskrit verb: 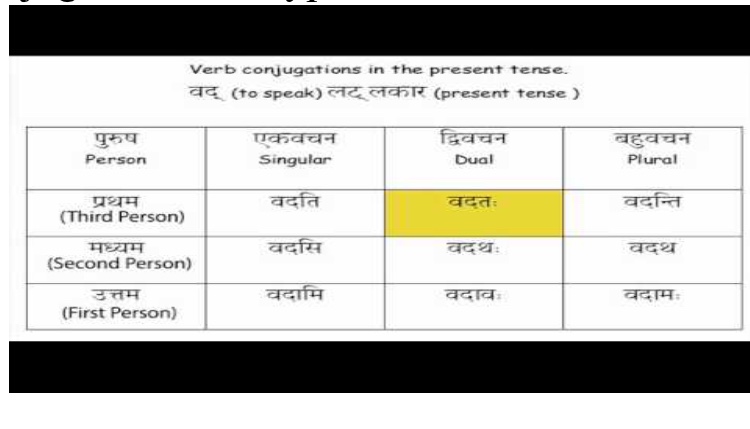 The body of Sanskrit literature encompasses a rich tradition of philosophical, religious, historical, astronomical, medical and scientific texts and poetry, music, drama, mathematics and grammar. In grammar, Panini and Patanjali (authors of Ashtadhyayi and the Mahabhashya) have no equals in the world; in astronomy and mathematics the works of Aryabhatta, Brahmagupta and Bhaskar opened up new frontiers for mankind, as did the works of Charak and Sushrut in medicine (Ayurveda). In philosophy Gautam (founder of the Nyaya system), Ashvaghosha (author of Buddha Charita), Kapila (founder of the Sankhya system) and Shankaracharya present the widest range of philosophical systems, from deeply religious to strongly atheistic. In Sanskrit literature, the works of Kalidas (Abhigyan Shakuntalam, Meghdoot, Malavikagnimitra, etc.), Bhavabhuti (Malti Madhav, Uttar Ramcharit, etc.) and the great epics – Ramayana by Valmiki and Mahabharata by Ved Vyas, are known all over the world. These and countless other Sanskrit works kept the light of learning ablaze in India until modern times. This is also the language of all Indic religions; Hinduism, Buddhism, Jainism and Sikhism. Thus, Sanskrit is an integral part of glorious Indian civilization and Indian ethos. Scientists of modern era consider Sanskrit as the most appropriate language for Artificial Intelligence.