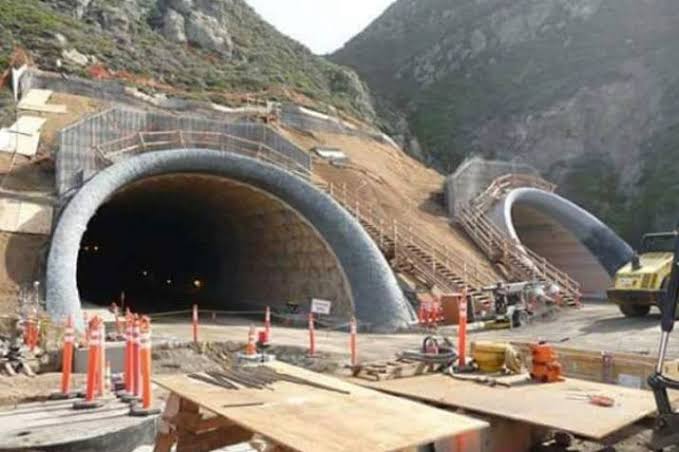 The Atal tunnel is the first step towards all-year connectivity to Ladakh. A significant link is the Nimu-Padum-Darcha road axis that will connect Leh through the Shinku La pass.
The opening of the strategically important 9.02 km Atal Tunnel connecting Manali to the Lahaul-Spiti valley, the world’s longest highway tunnel reducing the distance between Manali and Leh by 46 km and the travel time by four to five hours giving the timely Strategic and tactical advantage against china.
The feasibility study for the Atal Tunnel was first carried out in 1990 and the decision to construct the strategic tunnel below the Rohtang Pass was taken on June 3, 2000 by Atal Bihari Vajpayee.The foundation stone for the access road to the South Portal was laid on May 26, 2002 but the project was almost forgotten after his government was gone. The first blast took place in 2010 with Only 1,300 meters completed by 2013-14.
It is a horse shoe-shaped, single-tube, double lane tunnel with a roadway of eight metres and has an overhead clearance of 5.525 metres, with traffic density of 3,000 cars and 1,500 trucks per day, each of which can travel at a maximum speed of 80 kmph.The tunnel is built with ultra-modern specifications in the Pir Panjal ranges of Himalayas at an altitude of 3000 metres (10,000 feet) from the Mean Sea Level (MSL). It has the state of the art electro mechanical system including semi transverse ventilation system.The tunnel has been constructed using drill and blast NATM (New Austria Tunnelling Method) techniques.
The South Portal (SP) of Atal Tunnel is located at a distance of 25 km from Manali at an altitude of 3,060 metres, while the North Portal (NP) of the tunnel is located near village Teling, Sissu, in Lahaul Valley at an altitude of 3,071 Metres. The tunnel has ample safety features built into it including telephone connections at every 150 metres for emergency communication, fire hydrant mechanisms at every 60 Metres, auto incident detection system with CCTV cameras at every 250 metres, air quality monitoring at every one Km, evacuation lighting/exit signs and broadcasting system throughout the tunnel among others.
The Border Roads Organisation (BRO) worked relentlessly to overcome major geological, terrain and weather challenges that included the most difficult stretch of the 587-metre Seri Nalah Fault Zone.
The tunnel is the first step towards all-year connectivity to Ladakh. A significant link is the Nimu-Padum-Darcha road axis that will connect Leh through the Shinku La pass. The road is under construction which is expected to be completed soon.
The tunnel provides a strategic advantage to the country’s armed forces by providing 12 month all weather secure connectivity to border areas. The three lakh residents of Ladakh would remain connected through out year with the rest of the country who otherwise were devoid of  basic facilities like healthcare and food supplies during winters will now be able to reach Manali / rest of Bharat. For tourists, the 9-km-long tunnel will shorten the distance from Manali to Lahaul & Spiti districts by several kilometres.
The drop in travel time will help many, especially farmers whose precious crops like peas and potatoes will no longer rot in trucks before reaching Kullu mandi. Essential commodities like petrol and vegetable supplies would also be available throughout the year.
Tourism too will get boost. In Lahaul, visitors from Manali could come for day trips and return which as of now is impossible to conceive.The timings of  inauguration by PM Sh Narendra Modiji assumes greater significance and message to enemy nations in view of on going spat with China.