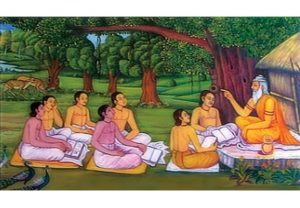 “India is the cradle of the human race, the birthplace of human speech, the mother of history, the grandmother of legend, and the great grandmother of tradition. Our most valuable and most instructive materials in the history of man are treasured up in India only.” – Mark Twain, American Author

​Education in ancient India was considered as a sacred process and was accorded the top most priority. No where else in the world has greater importance been attached to the teacher than in India. The period of first 25 years of life – called Brahmcharya Ashram – was designed for acquisition of knowledge and to prepare oneself for the realities of life ahead. In the Vedic system, a child started his education at the age of five. To mark this commencement, the Vidyarambha ceremony, which included worshiping Goddess Saraswati and learning alphabets for the first time, was conducted. To commence his/her education, a child had to leave home and live with a teacher in a gurukul or ashram for the entire duration of his studies. No fee was charged for education. The teacher took care of everything – food, clothing and housing. In the Epics of Ramayana and Mahabharata, there is mention of many well-known Rishis and their ashramas which were great centres of learning. These include ashramas of Rishis Vashishta, Vishwamitra, Vyasa, Saunaka, Kanava, Bhardwaj, Dronacharya and so on. The students were free to offer dakshina (thanks giving gift) to the teacher at the end of their education.

​The selection of a good teacher was considered extremely important. There used to be very limited number of students in each ashram and preferred mode of education was one-to-one. Physical labour constituted one of the important pillars of education. Even if a child was interested in acquiring philosophical or astrological knowledge, he would still have to do some manual work every day. All students irrespective of their family background and social status were treated at equal footing. Debates and discussions for search of truth constituted an important part of education. Over time two education systems emerged in India. The Vedic system revolved around the Vedas, Vedangas, the Upanishads and sixdarshanas (nyaya, vaiseshika, samkya, yoga, mimamsaand vedanta) while the Buddhist system preached the thoughts of the major Buddhist schools. The language of education was Sanskrit for the Vedic system and Pali for the Buddhist system. Education for women was equally important in ancient India. They were trained in housekeeping, as well as in dancing, music, sculpture, jewel making and medicine. Many of them even became Vedic scholars or Brahmavadinis. Some notable women scholars well versed with the Vedic knowledge included; Apala, Indrani, Ghosha, Lopamudra, Gargi and Maitreyi. Simple and honest living, control over mind and senses, and self-realisation and complete liberation from the cycle of birth and death (Moksha or Nirvana) were considered as the three most important objectives of education. In Vedic language धर्म (just and righteous behaviour), अर्थ(earning wealth), काम (fulfilment of desires) और मोक्ष(liberation from the cycle of birth and death) were considered as the primary mission of human life.

Ancient India had the most developed system of university education anywhere in the world. During 7th BCE to 12th AD when most countries in the world had no idea of higher education, there were over 40 large universities across India imparting higher education to over 10,000 students each. These were the most developed centres of learning anywhere in the world. Study of the Vedas, Sanskrit, philosophy, yoga, ethics, Buddhist studies, Ayurveda (medical science), surgery, agriculture, mathematics, logic, astronomy, political science, economics, jurisprudence, art and craft, archery, martial arts and warfare constituted some of the basic subjects at the universities. Students came from Greece, Persia, Arabia, China, South East Asia and Japan to study at these universities. Fa Hien, Xuanzang and Yijing are some of the well-known Chinese students who came to India undertaking very dangerous journeys across Himalayas. Similarly, many Indian scholars travelled to China at the invitation of the Chinese kings. These include; Kasyapa Matanga, Dharmaratna, Sanghvarma, Dharmasatya, Mahabala, Vighna, Dharmaphala, Kalaruchi, Lokraksha, Dharmakshema, Amoghvajra, Gautama Siddha (QutanXidha), Kumara Jeeva, and so on. Knowledge transfer also took place to Greece, Arabia, Persia and to the countries of South East Asia. Thailand, Indonesia, Cambodia, Vietnam and Myanmar were closely linked to the university system in India. Islamic scholars Al-Kindi, Al-Farabi, Al-Farghani, Al-Tarabi and Al-Khwarizmi played important role in transmitting Indian knowledge in mathematics, medicine, astronomy, philosophy and music to Arabia. 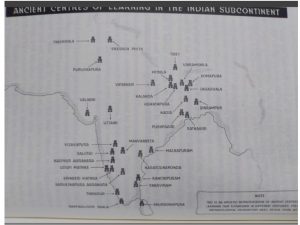 ​It was not easy to get admission into these universities and therefore students had to appear for entrance examination before they could be admitted. Only about 20% students would pass the entrance examination. Some of the well-known professors of that time include; Brahmagupta, Bhaskaracharya and Aryabhata (greatest mathematicians of all time), Vishnugupta or Chankya renowned political scientist, Varahmihira an astronomer and mathematician, Thiramati, and Gunamati who founded Vallabhi University in Saurastra, and Ramanujacharya a renowned philosopher.  Sahana Singh in her book ‘Educational Heritage of Ancient India’ has documented some of these facts.

​The very profound system of education in India gave birth to a language like Sanskrit which is the most scientific language in the world. Given its precision and scientific foundation, Sanskrit emerged as mother of most global languages popularly known as Indo-European languages. Great Indian mathematicians discovered numerical, zero, decimal system, algebra and geometry. This knowledge reached Europe via Arabia and hence the numerical were called Indo-Arabic numerical. India was the first country to discover the solar system with nine planets (नवग्रह) and their movements. Indian Rishis named seven days of a week after the first seven planets which was adopted later by all other nations of the world. Indian calendar reveals the most intricate movement of planets and makes precise adjustments between the solar year and lunar months. Thus, ancient India was the source of astronomical knowledge to the world. Ayurveda was the first ever health science discovered by humanity. Even today, the life-style based on ayurvedic science is a guarantee to good health. Very well advanced ancient Indian architecture can be seen in temple architecture of India, Indonesia and Cambodia. Indian gastronomy reflects deep knowledge of the quality of each of the products from plants and herbs and their possible combinations. Versatility of Indian cuisine remains unapparelled even after thousands of years. In this sense, ancient India was indeed the birth place of human speech and cradle of knowledge and civilization as stated by Mark Twain.

In the next article in this series, we shall briefly talk about some of the ancient Indian universities and their glorious achievements.

1 thought on “Education in Ancient India”