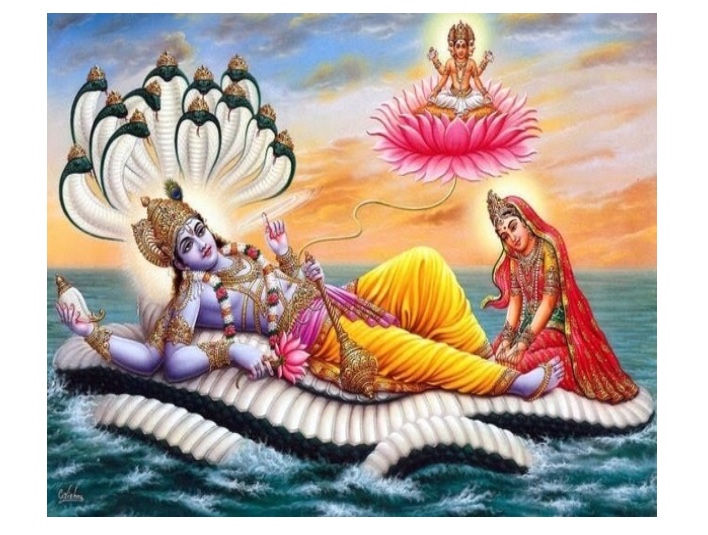 The Purush Sutka is the 90th hymn of 10th Mandala from Rig Veda originally with 16 mantras. This is a powerful hymn of the insight of the great Rishi Narayana, on the Cosmic Divine Being as envisaged through the multitudinous variety of creation. The mantras of this Sukta are composed in a particular metre (chhandas) which makes its own contribution by generating a special spiritual force during the recitation of the hymn. The Sukta begins with the affirmation that all the heads, all the eyes, and all the feet in creation are that of the Purusha or the Supreme Divine Being. Herein is implied the astonishing truth that we do not see many things, bodies, objects, persons, forms or colours, but only the limbs of the One Purusha who is all pervading and all encompassing. This song explains the unfolding of the universe from the Supreme Lord. Purusha is not a sectarian concept like the god of a religion, nor is Heone among many gods but the Universal Being. This is the most ancient concept of Oneness.

The Purusha has thousand heads, thousand eyesand thousand feet,
He pervades all over the land, entire cosmos and beyond.

All this manifestation is Purusha alone.Whatever was and whatever will be. The whole existence is woven by the immortal essence of the Supreme Lord (Purusha); by surrendering to Whom one transcends the gross world.

This vast and great cosmos is His Manifestation. Yet greater still is the Purusha than all the greatness of this cosmos. His one quarter has become all these manifested material worlds, and His three quarters constitutes in the immortal World of Transcendence.

The three quarters (तीन पाद) of the Supreme Lord represents the higher illuminated Transcendental Realm, while His one quarter (एक पाद) keep manifesting the entire cosmosagain and again.
There, in the cosmos, He pervades all the living (who eat) and the non-living (who do not eat) beings.

The Divine Purusha continued the process of creation (यज्ञ) with the Supreme Lord in thesubstratum; using Spring as the clarified butter, Summer as the fuel, and Autumn as the offering(हवि) of that Yagna.

The first divine men were created as the holy water was sprinkled with kusha grass in the process of creation (यज्ञ). They were the Sadhya,Devas and the Rishis, who were created directly by this Divine Purusha.

The Rig Veda and the Sama Veda,
the Chhandas (like Gayatri Chhanda) and the Yajur Veda were born following the finalofferings in the process of creation (यज्ञ).

From the process of creation (यज्ञ) were born the horses, and all those animals that have teeth in both jaws, the cows, and all types of goats.

The Brahmanas were His mouth, the Kshatriyas became His arms,
The Vaishyas were His thighs, and the Shudraswere His feet.

His navel became the sky, His head became the Heaven,
His feet the Earth, and His ears the directions. In this manner all the Worlds (लोक) were unfolded and regulated by Him.

The enclosures of the yagna were seven (the seven metres or chandas like the Gayatri), and twenty-one (the twelve months, the five seasons, the three worlds and the sun) were the logs of sacrificial fuel, when the devas (the pranas, the senses and the mind) celebrated the Universal Sacrifice with the Supreme Purusha as the object of contemplation therein.

The devas performed the external Yagna by meditating on the Universal Being (i.e. contemplating on the Purusha Who is shining behind everything). Thus, they obtained the original laws governing the universe (Dharma).By Meditating on the greatness of the Chidakasha (Blissful spiritual sky behind everyone, which is the essence of the Purusha), the spiritual aspirants became the Shining One themselves.

I know this Great Purusha who shines like the sun beyond darkness. By knowing Him alone does one cross beyond death; there is no other way of going over there.

1. Purusha or the Brahman has been referred to as He. However, this has no sexual connotation as Brahman is hidden in all appearances and forms. He is neither male nor female. Since He is hidden in all forms, He is male in a male, female in a female, bird in a bird and animal in an animal. In this sense Brahman is akin to space which turns into a house, a playground, a shopping mall, a factory or a warehouse depending on the use and structure. The use of He is only because of limitations of language.
2. The verse 12 represents four categories of humans who exist everywhere even today. These four categories are based on four fundamental qualities of humans. These are humans with intellectual power (scientists, professors, teachers etc.) – Brahmans; humans with physical prowess and leadership abilities (leaders, statesmen, warriors, army commanders, army personnel etc.) – Kshatriyas; humans with agro-industrial ability (industrialists, businessmen, farmers etc.)  – Vaishyas; and humans with the power of workmanship/craftsmanship (roughly representing the services sector) – Shudras. This is the description of their intrinsic qualities and was never intended to be hierarchical.  Unfortunately, overtime, this degenerated into a hierarchical system. It is indeed surprising as to how the body part of Brahman were interpreted as inferior or superior. This is mere misinterpretation by some vested interests to create rift in the society and to assert their supremacy.