Bhartiya civilization is profound, dynamic and versatile covering every aspect of cosmos and human life. Its roots are deep and are spread over several millennia. Many a times time lines appear blurred due distant past. Today, Bhartiya civilization looks more like a huge banyan tree whose multiple branches have taken roots supporting the original tree and giving it a new shape every now and then. Since it is not possible to cover all the contours of this vast civilization in this brief space, we shall have a brief look at some of them.

​Geographically, the civilization covers the vast landscape from the peaks of Himalaya – the house of snow – in the north, down to the Indian Ocean in the south, and from the Hindu Kush Mountains in the West to the Bay of Bengal in the East. In today’s context, this area is known as South Asian Regioncovering, India, Pakistan, Nepal, Bhutan, Bangladesh, Sri Lanka and parts of Afghanistan and Myanmar. 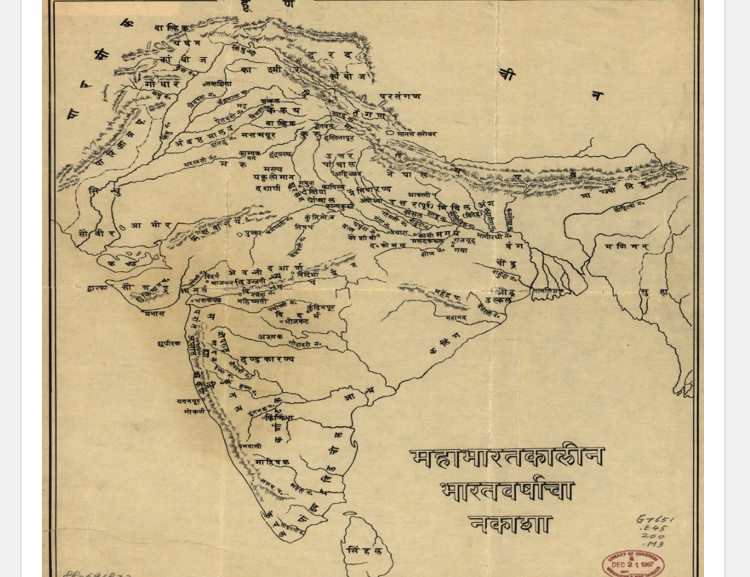 Since the search for the truth of our existence and the righteous human conduct are the foundations of Indian ethos, values, customs and behaviour; Bhartiyacivilization is also known as the Santana Dharma or the eternal law of existence that governs the cosmos. Many others call it the Hinduism or the Hindu Way of Life. There is no founder who started the Hinduism. Also, there is no single event or a sequence of events which may be cited as responsible for the founding. It is a civilizational flow over millennia and the quest for the truth that gave birth to this unique way of life. Over time, a vast amount of literature covering scientific discoveries about the physical nature, origin of life–force (पुरूष) and the law governing human conduct (धर्म) has been written by a galaxy of sages known as Rishis. The principal writings include; The four Vedas (Rig-Veda, Sama-Veda, Yajur-Veda, and Atharva-Veda); the 108 Upanishads which constitutes the culmination of the Vedic knowledge and hence also known as the Vedanta; the Bhagvad Gita;the Brahmsutra; the 18 Puranas; the Ayurveda (the science of life or medical science) and the great epics of the Ramayana and the Mahabharata. These scriptures are not sectarian, but universal in their approach and message. Covering every possible aspect of life and cosmos, these profound writings are unparallel in the history of human race. They are the source of in-depth analysis both of what is manifest and what remains non-manifest. A vast body of this knowledge was compiled by sage Ved Vyas. Since he was darkish in colour and was born on an island, he is also known as Krishna Dvaipāyana. He compiled the Vedas, the Mahabharata, the 18 Puranas and the Brahmsutra comprising more than 5,50,000 verses. In the history of mankind, he is the most prolific writer of all times.

This vast body of knowledge has been divided in six categories; Shrutis, Smritis, Itihasas, Puranas, Darshanas and Agamas. The Vedas and the Upanishads are Shrutis. This is the knowledge heard and recorded directly from those who realized it in the course of their deep meditation. The Bhagvad Gita and the Brahmsutra are Smritis. This knowledge is based on the memory of those who were witness to the discourses. The Ramayana and the Mahabharata are in the category of Itihasas or historical events of great importance. The 18 Puranas including the Vishnu Purana, the Shiv Purana and the Shrimad Bhagavatamare in the category of the Puranas. Samkhya, Yoga, Nyaya, Vaisheshika, Mimamsa and Vedanta are six Darshanas. These are the schools of Hindu philosophy based on the Vedic knowledge representing the Hindu Way of Life, its beliefs, practices and ethos. In practical terms, these are six different methods of evaluating and demonstrating the truth. The Agamas are the prayers and rituals, particularly those connected with the construction of temples and the worship of deities.

The Buddhism, the Jainism and the Sikhism are three other Indic religions that are offshoots of the Hinduism. They have accepted certain principles and have rejected some others depending on the need of place and time (देश और काल). Nevertheless, they are intricately linked to the Vedic knowledge and the Hindu Way of Life. Unlike many other religions, none of the Indic religions believe in blind faith. Every human being is free to question, examine and experience the truth before its acceptance. Periodic commentaries on these scriptures by intelligent minds have kept their teachings alive and relevant in this ever-changing world.