Calculation of Time – Yugas and Kalpa:

​In the last article we discussed the calculation of time beginning from atomic time or 1687.5 parts of a second up to a day. In this article we shall have a look at the astronomical time. One day of Brahma is called kalpa (कल्प). For arriving at the length of Brahma’s day, the precise mathematical calculations of time based on the movements of the Sun and the Moon are as follows:

• A tithi or lunar day is defined as the time it takes for the longitudinal angle between the Moon and the Sun to increase by 12 degrees. Therefore, the tithi begins at different times of the day and vary in duration from approximately 19 to 26 hours with an average of 24 hours. This is a rough equivalent of a day in the Christian calendar.
• Since a tithi is based on the movement of the longitudinal angle between the Sun and the Moon by 12 degrees, 30 tithis are needed to complete the circle with an angle of 360 degrees, a normal geometric measurement for heavenly bodies.
• 30 tithis therefore make a lunar month or masa(approximately 29.5 days).
• Based on the waxing and waning of the Moon, a lunar month has been divided into two parts called krishna paksh (between full moon and new moon) and shukla paksh (between new moon and full moon).
• A ritu or season is two months, three ritu is one ayanam and two ayanas is one year or 360 days.
• One year of 360 days equals one day of devas or demi-gods. Hence one year of devas (also called one divine year), equals 360 human years.
• The life span of devas is 100 years or 36,000 human years.
• 1200 divine years make one basic cycle of the yugas, or 1200×360=4,32,000 human years. One basic cycle constitutes the life span of Kali-yuga. Two such basic cycles or 8,64,000 human years make the life span of Dvapara-Yuga. Three such basic cycles or 12,96,000 human years make the life span of Treta-Yuga and finally four such basic cycles or 17,28,000 years make the life span of Satya-Yuga. One cycle of four yugas start with Satya Yuga and ends with Kali Yuga.
• One full cycle of four yugas is called a mahayugaor divyayuga which equals 43,20,000 years.
• One day of Brahma or a kalpa equals 1000 mahayugas or 4.32 billion (4 अरब 32 करोड़) human years with a night of equal duration. Therefore the 100 years of Brahma’s age equals 31.04 trillion (310 खरब एवम् 4 अरब) years.
• Additionally, there are 14 Manus in each kalpa, each presiding over a Manvantara made of 71 cycles of mahayugas and 15 Sandhyas of the duration of 17,28,000 years in the beginning of each Manvantara plus one at the end. 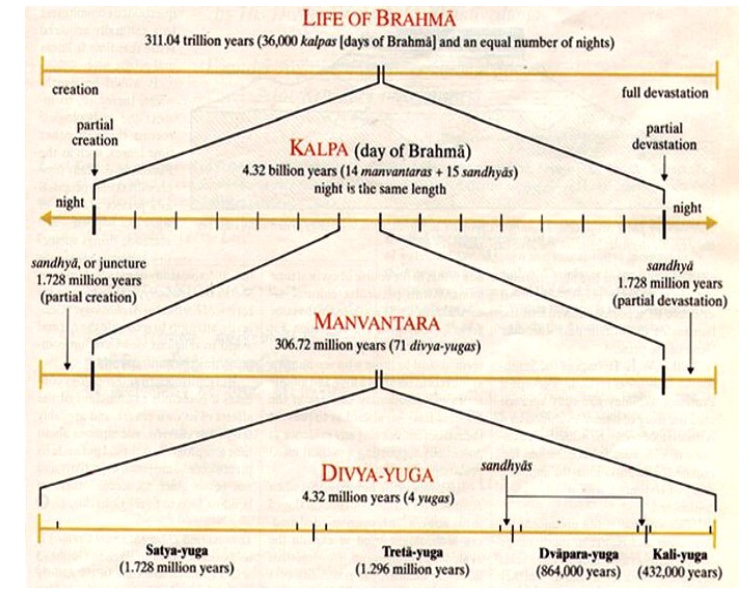 The above precise calculations based on cosmic movements; are a clear indication of the highly advanced knowledge of astronomy, mathematics and physics prevailing during that time. All these calculations are based on the circle of 360 degrees which is the only scientific measurement of heavenly bodies in the universe. 4.32 billion human years constituting one day of Brahma before the dissolution of the material universe, roughly compare with the age of the planet Earth as estimated by modern science. Structure and the functioning of the Universe must be precisely mathematical or else it could collapse any time leading to disaster on a scale beyond our imagination. These precisions are also visible in the movement of the Sun and other heavenly bodies, the change of seasons, the movement of water cycles, the movements of winds and so on. Even a miniscule deviation in the play of natural forces could destroy planets and galaxies in seconds. Miniscule deviations in seasons, temperatures, water cycles and the velocity of the wind could play havoc on our lives. Precise body temperature is yet another indication. Slight deviation in the temperature is the sign of disease. The functioning of human body itself is an evidence of the laws of nature and their self-regulating mechanism. Thus, the precise calculations in ancient Indian writings on the nature of cosmic movements are not based on hypothecations or philosophical ideas but on most advanced scientific research and analysis of the working of the universe. Modern science has not reached that level yet. As and when it does reach that level, it will arrive at the same conclusions as the Indian sages did thousands of years ago. This fact has already been proved in terms of Earth’s life and its rotation around the sun as until 15th century the western world considered the Earth flat and only 6000 years old with the sun circling around it. Without mathematical precision, the functioning of the Universe is impossible and is illogical. Such a presumption defies all logic and rationality. These principles of cosmic cycles have been reaffirmed in the Chapter 8 verses 17, 18 and 19 of the Bhagvad Gita.

The Concept of the Yugas:

​While the day of Brahma (kalpa) equivalent to 4.32 billion years remains the basic unit of creation and annihilation of the manifest universe, Brahma’s day has been divided into 1000 cycles of four yugas or 1000 mahayugas. These cycles of yugas repeat themselves like the seasons. While the length of each successive yuga decreases from 17,28,000 in Satya Yuga to 12,96,000 in Treta Yuga to 8,64,000 in Dwapar Yuga to 4,32,000 in Kali Yuga, the degradation of mankind increases proportionately, Kali-yuga being the most unethical and immoral. While morality, ethics and righteousness are 100% in Satya Yuga, they decrease to 75% in Treta, 50% in Dwapar and 25% in Kali Yuga. According to the puranic writings we are presently in the 1st day of 51st year of current Brahma’s life. Of 1000 cycles of four yugas of Brahma’s on-going day, we are in the 454th cycle. Of the current yuga cycle, we are in Kali-yuga which began at midnight between February 17 and 18, 3102 BC and hence we are in the 5128th year of Kali-yuga. What a precise calculation of time! The following verses from Srimad Bhagavatampredict human behavior and other attributes during Kali-Yuga. Let us take a brief look at these predictions. It’s for the readers to decide whether the description given below is true or not.

In Kali-Yuga, wealth alone will be considered the sign of a man’s good birth, proper behavior and fine qualities. And law and justice will be applied only on the basis of one’s power. (12/2/2)

Men and women will live together merely because of superficial attraction, and success in business will depend on deceit. Womanliness and manliness will be judged according to one’s expertise in sex, and man will be known as a brahmana just by his wearing a thread. (12/2/3)

A person`s spiritual position will be ascertained merely according to external symbols, and on that same basis people will change from one spiritual order to the next. A person’s propriety will be seriously questioned if he does not earn a good living. And one who is very clever at juggling words will be considered a learned scholar. (12/2/4)

A person will be judged unholy if he does not have money, and hypocrisy will be accepted as virtue. Marriage will be arranged simply by verbal agreement, and a person will think he is fit to appear in public if he has merely taken a bath. (12/2/5)

A sacred place will be taken to consist of no more than a reservoir of water located at a distance, and beauty will be thought to depend on one’s hairstyle. Filling the belly will become the goal of life, and one who is audacious will be accepted as truthful. He who can maintain a family will be regarded as an expert man, and the principles of religion will be observed only for the sake of reputation. (12/2/6)

Calculation of time based on Hindu Scriptures inLogarithmic Scale in Seconds from 10-7 to 1022 is given below in a scale. I do not know more detailed and more scientific calculation of time anywhere in any writing. 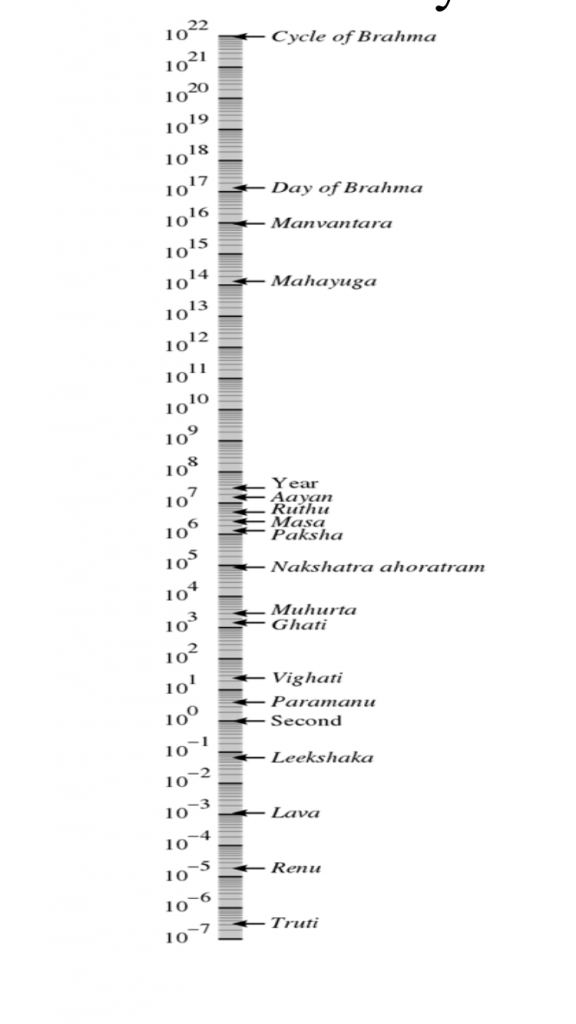