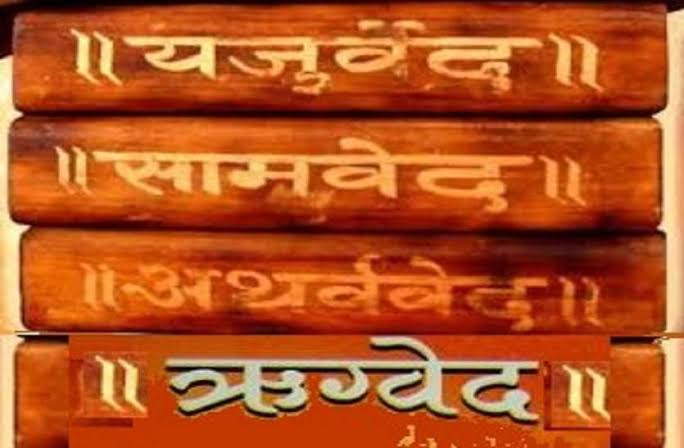 Before we look at the glimpses of the eternal wisdom enshrined in the Vedas, in this section I shall try to provide a brief overview of the contents and the structure of the other three Vedas.

Yajurveda is principally in prose form and is quite different from other Vedas. It has 40 chapters (अध्याय) and 1975 Yajus/Mantras. The term ‘Yajurveda’ is the combination of two Sanskrit words, ‘Yajus’ and ‘Veda’. ‘Yajus’ can be roughly translated as religious worship or yajnas. Hence it is primarily a ritual Veda for it is essentially a guide-book for the priests who preside over ritualistic work in yajnas (यज्ञ). It is also known for philosophical doctrines on Pranas and Manas and the principles of pranayama and asana. It also deals with mode of human conduct and human psychology. Yajurveda also provides a glimpse of social and religious life of the Vedic people. It has been divided into the Shukla Yajurveda and Krishna Yajurveda. The last section of Sukla Yajurveda contains the famous Ishavashya Upanishad while Kathopanishad forms part of Krishna Yajurveda.

The Samveda is shortest of all the four Vedas. It is closely connected with the Rigveda. The Samveda has 1875 Richas/Mantras from 184 rishis. A large number of these verses are from the Rigveda. These are primarily from the eighth and the ninth Mandalas of the Rigveda. The Samveda is devoted to the adoration, praise and worship of the Almighty; manifestations of his powers; and mode of worship for spiritual attainments. Its devotional hymns embedded with sublime thoughts. It emphasises for human beings to develop their mental and spiritual powers to their highest order. Indra, Agni and Soma deities are invoked and praised but most of the time the invocations are dedicated to the Supreme Being or the Almighty. Since the major theme of the Samaveda is worship and devotion to the Almighty through chants, it is also called as the Veda of Chants. Indian classical music and dance have their roots in the musical curves and dimensions of the Samveda. Apart from vocal music, this Veda mentions the existence of musical instruments; even clearly specifying how each instrument must be played. The Veda has a dedicated section (Upaveda) for this, called the Gandharva-Veda. This Upaveda is closely attached to the main Samaveda. The fact that Indian music has risen from the Samaveda is widely acknowledged by musicians and musicologists.

The Samhita of Atharva Veda is the last of the four Vedas. Philosophical portions of this Samhita present a fairly high development of metaphysical thought. It covers both the worldly happiness and the spiritual knowledge. Atharva Veda has been divided into 20 Kandas, 111 Anuvaak, 731 Sukta and 5977 Richas/Mantras. According to the etymology of the Nirukta, Atharvan is the name given to a stable-minded person who is immovably firm i.e., Yogi. Atharva and Angira rishi families are the major contributors of the Richas in this Veda. Precisely for this reason, it is also called as the Veda of the Atharvans and the Angiras.
Atharva Veda covers a wide range of topics. These according to their subject-matter, can be broadly divided into three categories – (a) related to the cure of diseases and destruction of adverse forces; (b) related to establishing of peace, protection, health, wealth, friendship and long life; and (c) related to the nature of supreme reality, time, death and immortality. In terms of specific disciplines, the Atharva Veda covers; spiritual prayers, human behaviour, mathematics, physics, astrology, cosmology, herbal medicine, military sciences and how to attain immortality and prosperity. The Atharvaveda is the oldest literary monument of Indian medicine. This Veda talks of application of medicines and medicinal herbs. It is believed to be the origin of Ayurveda, the Indian science of medicine. There are a series of Mantras related to cure various diseases both physiological and psychosomatic in nature. Another class of hymns include prayers for protection from the bite of snakes or injurious insects. Herbal medicine is unique to Atharva Veda. This is the earliest texts to record the evolution of medicine, medical treatment and healing. According to Patanjali, Atharvaveda had nine recensions (Shakhas) but the Samhita of the Atharvaveda is today available only in two recensions – the Shaunaka and the Paippalada. Some important and famous Suktas of Atharva Veda are as follows:
1. Bhumi-Sukta (12.1)
2. Brahmacarya-Sukta (11.5)
3. Kala-Suktas (11.53, 54)
4. Vivaha-Sukta (14th Kanda)
5. Madhuvidya-Sukta (9.1)
6. Samanasya-Sukta (3.30)
7. Rohita-Sukta (13.1-9)
8. Skambha-Sukla (10.7)
We shall talk about some of these Suktas in the subsequent articles. Famous Mandukya and Mundak Upanishads form part of Atharva Veda.

1 thought on “Vedas the most precious heritage of humanity”