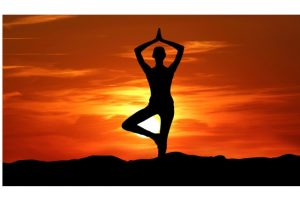 “The rhythm of the body, the melody of the mind and the harmony of the soul create the symphony of life.” -B.K.S. Iyengar

​The term “Yoga” in the western world is often misunderstood as a form of exercise consisting largely of the body postures or asanas synonymous to Hatha Yoga. Yoga is not only a much deeper science but has been classified as one of the six major philosophical schools of Hinduism. Yogic science is at least seventhousand years old. Yoga has been mentioned in the Rigveda, the most ancient text on the planet. In addition, Vedic writings have numerous references to yogic practices. A variety of yoga practices can also be seen on the archeological artifacts of ancient Indiaincluding those of Indus Valley Civilization. The word yoga comes from the Sanskrit root ‘yuj’ which means to unite or to join. The union of individual soul with the universal soul or the divine is called yoga (योग). According to Jaques S. Masui, “Yoga is nothing but the total experience of human life; it is the science of the integral man!”

​According to Indian writings, Brahma the creator was the original author of yogic science as a holistic system of health for body, mind and soul. The system was first collated and written down by Patanjali in his Yoga Sutras some two thousand five hundred years ago. There are eight stages of yoga called yama, niyama, asana, pranayama, pratyahara, dhyana and samadhi. Yama is the collective name for universal moral values of non-violence, truth, non-stealing, love, control over sensual organs and absence of greed or avarice. Niyama stands for the rules for self-purification such as healthy eating habits, healthy lifestyle, detoxification of body, personal hygiene, contentment, austerity and understanding the Self. Asanas are body postures and pranayama breathing exercises; which are done together to regulate the flow of pranic energy in the body to maintain good physical health of the body. They provide cosmic energy for different body parts to keep the body supple, energetic, calm and connected to macrocosm. The digestive, excretory, respiratory and circulatory systems of the body could also be regulated by asanas and pranayama. Pratyahara and dhyana are meant to direct the sense organs inward and to stabilize the mind. This is the state of meditation or complete concentration uniting the senses, the mind and the soul. Samadhi is the final stage when individual spirit is united with the universal spirit leading to infinite peace and happiness. In this state the person loses his individual identity and merges with the infinite universal spirit. The following verses from Bhagvad Gita provide a brief description of a Yogi – a person who is established in yoga.

A person is said to be elevated in yoga when, having renounced all material desires, he neither acts for sense gratification nor engages in fruititive activities.

A person who has acquired knowledge of the self and has conquered his senses is called yogi. For such a self-controlled person everything he sees, whether it be pebbles, stone or gold is the same. (6/8)

A person is considered still further advanced when he regards honest well-wishers, affectionate benefactors, the neutral, the mediators, the envious, friends and enemies, the pious and the sinners all, with an equal mind. (6/9)

​Therefore, yoga is a holistic system which comprises individual and social code of conduct, methods of physical well-being and a union of the individual soul with the universal soul leading to infinite peace and happiness. This is a complete science of body, mind and soul. It is a matter of great satisfaction that some aspects of this great science have staged a comeback in the last five decades. Even modern science has now recognized their immense value. In the recent years many universities and schools have introduced yoga classes as part of their regular curriculum. In recognition of the greatness of yogic science and its benefits to humanity, the United Nations has declared June 21st as International Day of Yoga.

​Dhyana is one of the eight limbs of yogic science specially designed to stabilize human mind. Mind is the most potent yet most volatile instrument of human body. It is also the most mysterious. Mind is the source of thoughts, imagination, doubts, stress and emotions (love, jealousy, hatred, anger, turbulence, depression etc.) and a store house of memories. It is the fastest travelling instrument and the only instrument that can go back in time. The mind in its own place and in itself can make a hell of heaven and heaven of hell. Almost all human actions are inspired and dominated by mind knowingly or unknowingly. Precisely for this reason, according to verse number two of the BrahmbinduUpanishad mind has been described as the cause of human bondage and sufferings as also of liberation and eternal happiness.

Mind is the primary cause of human bondage as also of liberation.

​In the second section of the Yoga Sutras, Sage Patanjali declares that the states of mind (vrittis) produced by afflictions (klesas) can be eliminated with the help of dhyana. The afflictions listed in the scripture (2.4) are ignorance (avidya), egoism (asmita), attachment (raga), aversion (dvesha) and longing for life (abhinivesa). Dhyana is a practice where an individual uses a technique of focusing the mind on a particular object, thought or activity to train attention and awareness to attain a mentally clear and emotionally stable state. Mindfulness meditation encourages the practitioner to observe wandering thoughts as they drift through the mind. The intention is not to get involved with the thoughts or to judge them, but simply to be aware of each mental note as it arises.

​With the help of dhyana, one can observe one’sown feelings, emotions, thoughts, reactions, responses, sensations and the motives hidden behind the actions. Thus, one can realize how we subject ourselves to suffering, anxiety and stress in various situations. Mind is a mutable formation which we keep on constructing as the time goes by. Since mind and air are made of same material, mind is always on the move creating instability. Dhyana is very helpful in reining the mind, knowing the mind and transcending it through self-absorption. With the help of dhyana, one can learn to control thoughts, cultivate discernment and respond to situations arising in one’s life with intelligence and thoughtful consideration. In the ultimate analysis, dhyana enables one to become one’s own master and driver rather than being driven by mind thereby transforming the bondage and sufferings into liberationand eternal happiness.